Response to Timothy Keller's "The Importance of Hell" Part 5

In brief review, we learned that to assume the penal substitutionary death of Christ as THE explanation for what occurred on the cross is false. Again, there are significant reasons to be hesitant to embrace Keller’s defense of the Penal Substitutionary Atonement as “the Gospel.”

First it fails to recognize that for the first fifteen hundred years of Church history the penal substitutionary atonement was not even one explanation for the work of calvary! A type of substitutionary death was not introduced until Anselm in the 1100’s. The primary views held up until that time were the Christus Victor and the Ransom theories. So if the Church was operating for 1000-1500 years without a proper view of the atonement how do you account for its blazing success during its first 500 years where it grew at a 40% rate per decade for the first 300 years!? (Rodney Stark: The Rise of Christianity)

Second, the most respected theologians acknowledge that the cross is ultimately a mystery with perhaps as many facets as there are needs in which it fulfills! Leon Morris in his stunning essay on the atonement says:

“In the NT the cross plainly occupies the central place, and it is insisted upon in season and out of season that this is God’s way of bringing salvation. There are many ways of bringing this out. The NT writers do not repeat a stereotyped story. Each writes from his own perspective. But each shows that it is the death of Christ and not any human achievement that brings salvation.

But none of them sets out a theory of atonement. There are many references to the effectiveness of Christ’s atoning work, and we are not lacking in information about its many – sidedness. Thus Paul gives a good deal of emphasis to the atonement as a process of justification, and he uses such concepts as redemption, propitiation, and reconciliation. Sometimes we read of the cross as a victory or as an example. It is the sacrifice that makes a new covenant, or simply a sacrifice. There are many ways of viewing it. We are left in no doubt about its efficacy and its complexity. View the human spiritual problem as you will, and the cross meets the need. But the NT does not say how it does so.”

“All the above views, in their own way, recognize that the atonement is vast and deep. There is nothing quite like it, and it must be understood in its own light. The plight of sinful man is disastrous, for the NT sees the sinner as lost, as suffering hell, as perishing, as cast into outer darkness, and more. An atonement that rectifies all this must necessarily be complex. So we need all the vivid concepts: redemption, propitiation, justification, and all the rest. And we need all the theories. Each draws attention to an important aspect of our salvation and we dare not surrender any. But we are small minded sinners and the atonement is great and vast. We should not expect that our theories will ever explain it fully. Even when we put them all together, we will no more than begin to comprehend a little of the vastness of God’s saving deed.”

(To read more by Morris, a concise yet rich explanation of the atonement theories is provided in full elsewhere on this site.)

I appreciate the way respected theologian Scot McKnight chooses to use the description “stories of the Atonement” rather than calling them views or theories:

“This may come as a surprise, but the Church never sensed a need to articulate a single explanatory theory for the Atonement. Some ask why the Church never ‘solved’ the Atonement question. I believe it was because they knew it took more that one story to tell that story, and I believe also they knew it as a reality so rich in diversity that attempts to narrow it down to manageable size were unwise.” (Embracing Grace, p 94)

Keller’s rationale for the penal substitutionary atonement unfortunately resonates and connects with the things we have heard in church all our lives as well as the age old story-line of angry gods needing to be appeased. The evangelical party-line continues on unchallenged and unrevised continuing to pervert our understanding of the Father’s heart.

Keller begins his conclusion to his article with the following:

The doctrine of hell is crucial-without it we can’t understand our complete dependence on God, the character and danger of even the smallest sins, and the true scope of the costly love of Jesus. Nevertheless, it is possible to stress the doctrine of hell in unwise ways. Many, for fear of doctrinal compromise, want to put all the emphasis on God’s active judgment, and none on the self-chosen character of hell. Ironically, as we have seen, this unBiblical imbalance often makes it less of a deterrent to non-believers rather than more of one. And some can preach hell in such a way that people reform their lives only out of a self-interested fear of avoiding consequences, not out of love and loyalty to the one who embraced and experienced hell in our place. The distinction between those two motives is all-important. The first creates a moralist, the second a born-again believer.

Translation: “don’t preach or defend the doctrine of hell like a Calvinist but rather like an Arminian. If you preach it like a Calvinist you will evoke a slavish fear of God. If you preach it like an Arminian it goes down a lot easier” (all the while producing a slavish fear of their own ability to secure a “saving faith” and undermining their assurance!) A most revealing characteristic of Keller’s ministry is that he is a Reformed pastor holding to the Westminster Standards all the while following a deeper intuition not to reveal the “fine print” of his Calvinism publicly and thus frequently sounding like an Arminian.

We must come to grips with the fact that Jesus said more about hell than Daniel, Isaiah, Paul, John, Peter put together. Before we dismiss this, we have to realize we are saying to Jesus, the pre-eminent teacher of love and grace in history, “I am less barbaric than you, Jesus–I am more compassionate and wiser than you.” Surely that should give us pause! Indeed, upon reflection, it is because of the doctrine of judgment and hell that Jesus’ proclamations of grace and love are so astounding.

Perhaps we need to recall that the problem throughout Biblical history is that we humans have always been the ones to be corrected by God for our “barbaric-ness” and lack of mercy and compassion towards the lost. Think briefly of Jonah, The Elder Brother, the Pharisees, the vineyard workers and those who wanted to stone Paul for declaring the wider Gospel of inclusion toward the Gentiles. The Bible is replete with examples. I think the human precedence is that WE are the ones to be righted by God in our unmerciful and ungracious ways and attitudes. (Is not that our reputation? Would not the world say “Amen” to that?)

But what of Jesus’ mentioning hell more than all the other Biblical authors put together? First, we encourage everyone to do an eye-opening word study on the words “hell” and “eternal.” Second, the Apostle Paul was appointed the interpreter of the Gospels and he mentioned “hell” only once when he wrote: “Oh death where is your sting? Oh Hell where is your victory?” Third, consider that the danger of “hell” was always pointed toward the religious not the world. But as Romans 9-11 demonstrates there is an exclusion for a time but then a final inclusion. And finally note that most scholars including Dr. Preston Sprinkle (Erasing Hell) have determined that the only passage by Jesus that might point to eternal conscious torment is in Matthew 25 (and since the writing of Erasing Hell Sprinkle has changed his position away from eternal conscious torment!) Read more on Matthew 25.

But aren’t God’s ways “higher than ours” meaning we can’t understand why He would send people to an eternal hell of punishment? Ironically, the very passage evangelicals predictably use to defend an eternal hell is actually declaring the OPPOSITE of their intended application! Isaiah 55 is about how God’s MERCY will “freely pardon the sinner; ‘for My ways are higher than your ways and My thoughts than your thoughts,’ says the Lord.” God is seen as continually reorienting US towards HIS vision and scope of mercy!

To address Keller’s insistence that “only a view of salvation from Eternal Conscious Torment will evoke a sense of what we are saved from,” we must start with what God says are the consequences of sin: “The wages of sin is death.” It is death–disintegration in every aspect of our existence: spiritual, physical, psychological, familial, social, environmental and global. There is no cure for this condition. Man has illusively tried to think and scheme up a salvation plan to no avail. We are told that the mind of sinful man is death. Our carnal mindset is on a continual path of destruction apart from a rescue by our Creator. Death and bondage to the fear of death and bondage to our fleshly mindset comprise a hopeless condition with no way out. It is therefore a condition that we are saved from not a location! But no less hopeless without Christ and His incarnation!

Christ came to undo the curse of Adam and “make all things new.” For “in Adam all die so in Christ will all be made alive.” Can you take these statements at face value? Do you desire to take them at face value? Again, trust your redeemed heart to reveal to you a God better than you ever imagined and a salvation beyond your highest hopes!

“Now to him who is able to do immeasurably more than all we ask or imagine, according to his power that is at work within us, to him be glory in the church and in Christ Jesus throughout all generations, for ever and ever! Amen.”   Eph 3:20,21 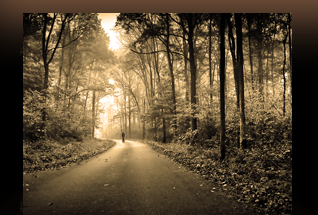 Providing a safe venue for the Body of Christ to explore the hope, desire, and inkling that the redemptive love of God in Christ may be bigger and more powerful than we've been allowed to believe. The purpose of God's Love Wins is to reveal how the Body of Christ together has always supported the Story of God's complete and final victory over sin, death and evil. We affirm foundational doctrines of both the Reformed (Calvinism) and the Arminian (Free-will) perspectives and embrace the truths contained in the historical creeds.