Hell, It Has Its Problems

ave you ever had an experience similar to mine?

I talked with a man who told me that he stopped believing in God and going to church when he heard that most of his friends, and a lot of people in other parts of the world who had never heard of Jesus were going to go to Hell. He decided at that time that he just couldn’t believe in a God who was that uncaring! He now professes to be a Buddhist.

Although we would prefer not to acknowledge it, the concept of Hell as a place of never ending, conscious suffering for the majority of the human race poses several significant problems that have caused many people to reject Christianity – not the least of which is how this teaching relates to who God is and what He has revealed about Himself in Scripture.

Does God show favoritism? Has He deliberately chosen to extend His love and grace to some of His creatures while intentionally withholding it from the rest? Has He purposely selected some for salvation while passing over others?

The Westminster Confession of Faith – the guiding document for the Presbyterian and Reformed churches – seems to be very clear in answering “yes” to that question. Chapter III, Article III, Of God’s Eternal Decree says:

By the decree of God, for the manifestation of His glory, some men and angels are predestinated unto everlasting life; and others foreordained to everlasting death.

In contrast to the above, however, Scripture tells us that God is fair and impartial. We are specifically told in Deuteronomy 10:17,

For the LORD your God is God of gods and Lord of lords, the great God, mighty and awesome,who shows no partiality and accepts no bribes.

The apostle Paul tells us in Romans 2:11 that “God does not show favoritism,” and charges his readers in I Timothy 5:21 “in the sight of God and Christ Jesus and the elect angels, to keep these instructionswithout partiality, and to do nothing out of favoritism.” Likewise, James exhorts us, “as believers in our glorious Lord Jesus Christ, don’t show favoritism.

Does God’s nature change from one age to another? Is He in some way bound by time? Does He act graciously toward sinners while they are alive on earth, but withdraw His hand of mercy at death?

If you ask Christian believers if God would have fully forgiven Adolf Hitler for his horrendous atrocities if he had sincerely repented of his sins just prior to his death, most would say, “Yes, of course.” But, if you ask if God would offer the same forgiveness in a coming age, most would say that is not possible.

And, yet, Scripture clearly indicates that God does not change, and that His grace extends to the coming ages.

In Malachi 3:6, God tells His people, “I the LORD do not change. So you, O descendants of Jacob, are not destroyed.” The writer of the book of Hebrews tells us that “Jesus Christ is the same yesterday and today and forever.” In countless passages in the Old Testament we are told that God’s love “endures forever.”

On earth we are told to love our enemies. Jesus asked the Father to forgive those who crucified Him.Paul told us that while we were yet sinners, Christ died for us. And, in Ephesians 2:7, he tells us that the incomparable riches of God’s grace extend to the coming ages.

The apostle Paul told his readers that God wants all to be saved and come to a knowledge of the truth. Is He powerless to accomplish this desire? Jesus said He came to seek and to save that which was lost. Did He fail in His mission? Is mankind’s free will greater than God’s sovereign will?

Most Christians would not hesitate to acknowledge that God is all-powerful and able to accomplish all that He desires – except in the matter of mankind’s salvation. But, Scripture indicates that absolutely nothing is able to thwart God’s ultimate will – including the will of man.

The heart of the king is in the hands of the LORD, and He turns it as a watercourse wherever He pleases. There is no wisdom, no insight, no plan that can succeed against the LORD. He is the Most High God who rules over the kingdoms of men and sets over them anyone He wishes. The LORD doeswhatever pleases Him, in the heavens and on the earth, in the seas and all their depths. He can do all things; no plan of His can be thwarted. Nothing is impossible with God.

We rightly look with contempt on earthly rulers who either torture their subjects or sit by idly and watch them suffer. Does the Ruler of all things do the same on a scale so vast that it dwarfs the imagination? Has He purposely chosen to consign the vast majority of the human race to endless, conscious suffering?

Scripture is very clear that God is loving. In fact, He is not simply loving, He is love!

The LORD is good to all; He has compassion on all He has made. The Most High is kind to the ungrateful and wicked. He does not stay angry forever, but delights to show mercy. Men are not cast off by the Lord forever. This is good, and pleases God our Savior, who wants all men to be saved and to come to a knowledge of the truth.

Sincere Christians differ in their understanding of ultimate destinies. But, whatever our view, we must make sure that it is in line with what Scripture teaches about who God is and what He is like.

God is good! In fact, no one is truly good, except God alone! A problem presents itself, however, when people try to redefine the meaning of “good” to fit their theological framework.

The Pharisees are a clear example of this. They prided themselves on their knowledge of the Law and their desire to defend the holiness of God. When they saw Jesus perform “good” works of healing on the Sabbath, they said what He was doing was evil. They had redefined “good” to mean insensitivity to the needs of others. Jesus told them to “go and learn what this means: ‘I desire mercy, not sacrifice.’”

People who maintain that Hell is a place of unending, conscious suffering often say, “God’s ways are different from our ways,” and ask, “How can we, as finite mortal creatures, judge God?”

Those statements are obviously true. God’s ways are different from our ways, and we finite creatures are not able to judge God. But, God has revealed what His ways are, and they are not baser than ours, they are higher. Notice the context of the verses of Scripture where Isaiah tells his readers about God’s ways differing from our ways.

Let the wicked forsake his way and the evil man his thoughts. Let him turn to the LORD, and he will have mercy on him, and to our God, for he will freely pardon. ‘For my thoughts are not your thoughts, neither are your ways my ways,’ declares the LORD. As the heavens are higher than the earth, so are my ways higher than your ways and my thoughts than your thoughts. As the rain and the snow come down from heaven, and do not return to it without watering the earth and making it bud and flourish, so that it yields seed for the sower and bread for the eater, so is my word that goes out from my mouth: It will not return to me empty, but will accomplish what I desire and achieve the purpose for which I sent it.

God is not more vindictive or judgmental than we are. He is far more compassionate and far more powerful than we are. He desires to show mercy and freely pardon, and His desires and purposes will be accomplished!

. . . I know that infinite goodness must be goodness, and that what is not consistent with goodness, is not consistent with infinite goodness. . . . To say that God’s goodness may be different in kind from man’s goodness, what is it but saying, with a slight change of phraseology, that God may possibly not be good? To assert in words what we do not think in meaning, is as suitable a definition as can be given of a moral falsehood.

God is not partial – favoring some over others. God is not mutable – changing His disposition toward humanity by acting graciously toward sinners while they are alive on earth, and then withdrawing His hand of mercy at death. He is not impotent – desiring to save all, but ultimately powerless to do so. And, He is not cruel – able to save all, but choosing rather to consign most of the human race to endless, conscious suffering. 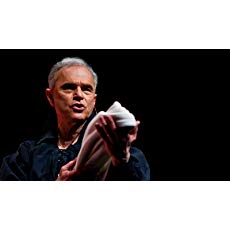 George W. Sarris is a popular author, speaker and performer who has spent a lifetime addressing Biblical and family issues throughout the U.S.

A 1978 graduate of Gordon-Conwell Theological Seminary, he's served on the staffs of three missionary organizations and has published numerous blog articles on ultimate restoration on ChristianPost.com - the world's largest online Christian news website. He's been a featured speaker at conferences, churches, men's retreats and conventions across the country and has performed his unique one-man shows in the U.S. and abroad. He's the narrator of Zondervan's 2011 revision of the Holy Bible New International Version featured on BibleGateway.com and the creator of an award-winning series of children's CDs that bring the Bible to life.