Are All Forced Into the Kingdom? Reading Luke 16:16 as a Theological Passive

uke 16:16 is a provocative verse that nobody quite knows how to interpret...and they never have. If read in the theological passive with certain conditions, it could support the idea of universal salvation. Let’s break down the verse and see what’s at stake.

There are three main parts of the verse, but we will focus on the last part. The three parts are as follows: The Law and the Prophets were until John (a); the good news of the kingdom of God is preached (b); and everyone forces (Greek biazetai) his way into it (c). The fulcrum in the content of the verse is the function of the Greek word biazetai, which usually means “use force/violence”. The two main questions about Luke 16:16c we will address are what the word means and how it should be translated--whether in the active or the passive sense. It yields different theological results based on how one translates the verse.  For instance, if Luke 16:16c is passive, this verse could show that everyone is actually forced by God to enter the Kingdom, supporting Universalist positions. Nevertheless, to fully understand the verse, we need a “both/and” rather than an “either/or” approach. The robust but ambiguous word biazetai is meant to suggest that the reader should wonder what relation violence and force has to the Kingdom of God. Grammatically the passive makes the most sense for a translation, but the active part of the verse's message cannot be dismissed.

Biazetai in this verse is in the middle/passive form of the Greek verb. This means, roughly, the middle/passive word biazetai can be translated as active or passive. An active statement is “I read the book”, whereas a passive statement is “I was read the book (by somebody)”. The person doing the action (reading) differs. In the active statement it was “I” that was reading, but in the passive statement it is “somebody” reading to me. If Luke 16:16c is a passive, it is likely a theological passive. A theological passive is a grammatical construct where God is the one doing the action. An example can be found in section b of the verse--the good news is proclaimed (euangelizetai-by Jesus). In Luke 16:16c, the option is between “all force their way in” (active) or “all are forced in (by God--passive). If biazetai is a passive, it would offer scriptural support for Universalism.

Let’s look at some translations. We will only focus on the last part of the verse. An interlinear version can be found here.

‍Meaning of Biazetai -- Strong and Weak Definitions
‍The last two translations imply all people are forced into heaven (possibly by God). Before we press further ahead, however, we should investigate the differences in the definition of biazetai in the verses above (forces vs. presseth vs. violently vs. urge). Biazetai has a range of meanings, some more forceful--literally it can mean use force and violence--and some softer--it can mean urge or press. One can see some range of meaning in the LSJ entry for the word. Cortes and Gatti, in an article called “On the Meaning of Luke 16:16” use linguistic evidence in contemporary documents (e.g. a letter to Sarapion in 22 AD and the use of the word in Josephus) and the Septuagint to show that the word often means something like “insistently urged” or “persistently invited”. The word is never truly weak, but the strong sense of the passive we find in Hart’s and Ramelli’s translations loses steam if we translate the verse “everyone is invited into it”. Is God “Inviting everyone into the Kingdom” or is He “Forcing everyone into the Kingdom”?

So, we need to make two main choices with biazetai. We need to choose whether it is active or passive and how strongly to take its definition. Below is a table of the possibilities.

So Is Biazetai Passive?
‍There is nothing grammatically wrong translating biazetai either as an active or a passive. Most ancient sources are silent on the topic but prefer the former option. Historically the question was usually not whether biazetai was middle or passive, but whether it should take a stronger or weaker definition and other things not addressed in this article. Ramelli does point out some variations in a minority of ancient texts that translate the verse as passive in her article “Luke 16:16: The Good News of God’s Kingdom is Proclaimed and Everyone is Forced Into It”. There are two main reasons biazetai makes more sense in the passive, but neither argument is airtight. First, Luke 16:16b is a passive. Second, the parallel story in Matthew 11:12-13, the only other place where the word biazetai is used in the New Testament, should be translated in the passive. If the verse is a theological passive with an unequivocally strong meaning of biazetai, the verse supports the salvation of all.

Let’s move to the second piece of evidence. Matthew has this “same” speech from Jesus in 11:12-13. One must proceed with caution and not conflate two gospels to force agreement. Matthew 11:12 accounts for the only other use of the word biazetai in the New Testament, and it is translated in the passive. In these verses it is clearer that since John the Baptist the “kingdom of heaven has suffered violence (biazetai-passive)... and violent men (biastai) seize it”. In other words, Matthew separates the word causing confusion in Luke 16:16c out a little more--violence is suffered by the Kingdom (passive) and violent men seize it (active). Overall it makes more sense to translate Luke 16:16c as a passive. However, we should not stop our understanding of the verse here.

Can It Be Both?
‍We should not lightly dismiss the early and modern readings that make the meaning active in Luke 16:16c. We must take both active and passive senses seriously. The general uncertainty in Luke 16:16c has persisted since the time of the Church Fathers, and this offers us a clue. If the voice and meaning of biazetai was obscure then and now, it is likely this was intentional. Biazetai is not a weak word; it was chosen deliberately. It’s shocking. While the passive in 16b and the use of biazetai in the Matthew parallel should make the first reading of Luke 16:16c passive, it is not immediately and clearly so. We should read Luke in the passive, but we should not ignore the ambiguity of meaning. Biazetai should bring to mind both forcing and being forced into the kingdom. The reader is meant to go through this process:

As seen in the parable directly after our verse, the Rich man and Lazarus in Luke 16:19-31, repentance is needed to avoid torment in Hades. True repentance, to really give up the mammon of the Pharisees in Luke 16:13--directly before our verse--and follow Christ is not easy. As the Blessed Theophylact in his commentary on Matthew 11:12 declares, “Christ, by saying of Himself that He is greater than John, strongly urges them to believe in Him, showing that many are by force acquiring the kingdom of heaven, that is, faith in Him. And there is need of great force, for in order to leave father and mother and to despise one’s own life, how much force is needed?” God opens doors to those the Pharisees are trying to keep out. Jesus preaches the radical inclusivity of His message to the Pharisees. His proclamations are an awakening and invigorating proclamation that the entrance is meant for all and preached for all. Still, while God pulls and calls us in, the Kingdom is not for those lacking zeal nor for the faint of heart. If it were, biazetai would have been replaced by a less jarring word and the sense made clearer.

Conclusion
‍Although most sources, ancient and modern, interpret 16c as active, there is nothing wrong with translating it as a theological passive. Overall this actually seems more probable, and it does potentially open up the meaning of the verse to Universalism. This is likely a theological passive with a mostly strong or strong meaning of biazetai. However, it is a mistake to translate this verse too narrowly. The Greek language is a suggestive one. Biazetai is suggestive of force. The grammatical form of biazetai is suggestive of both middle and passive readings. God forces/urges and the person has to press, to strive, and thus repent. True repentance, to really give up all and follow Christ, is never easy. To keep the forcefulness of biazetai, which seems lost in translating it as “urged”, I like a synonym--pushed. The sense of  this verse is “all are pushed into the Kingdom (and all must violently push themselves)”. 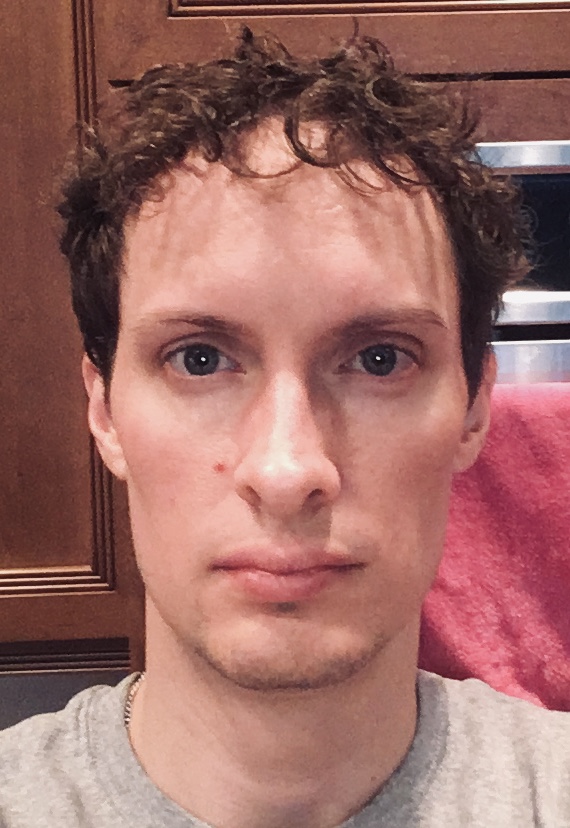 Tommy is an educator in Louisville, Kentucky. He received a Classics degree from Transylvania University (Minor in Philosophy) and received a Masters Degree in Classics from Florida State University. He lives with his wife and high-school sweetheart and their two-year old daughter who seems to run the house. Or the animals. It’s definitely not the adults.